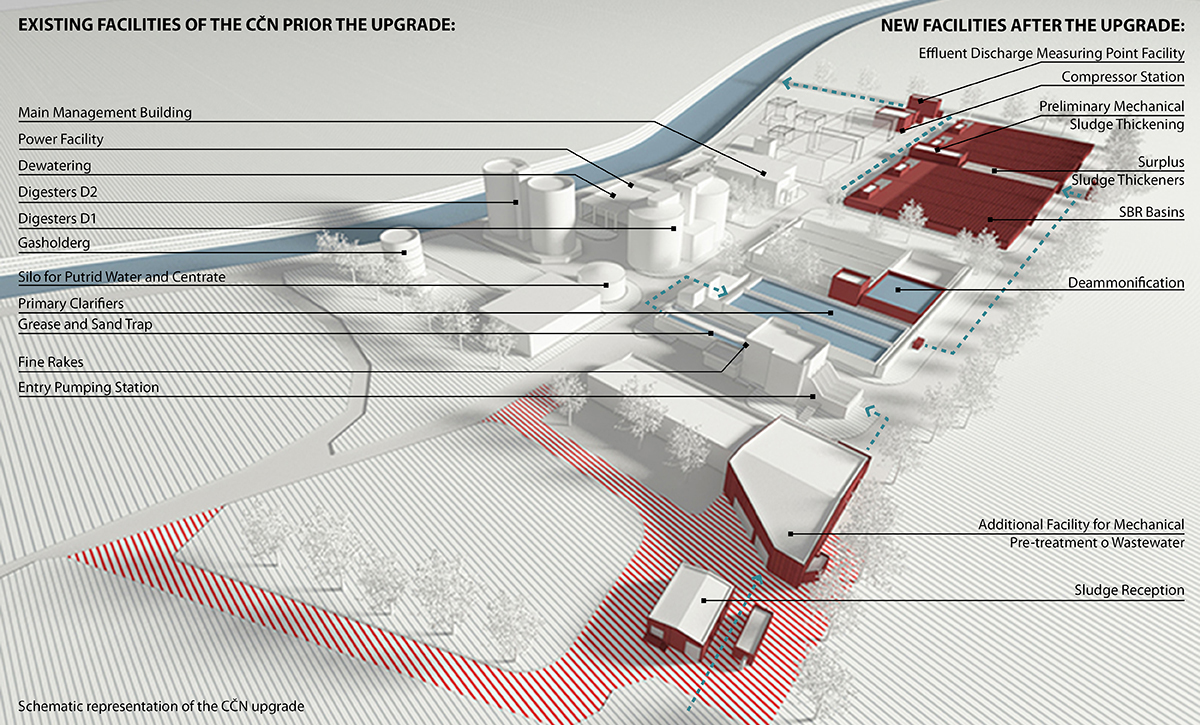 Schematic representation of the CČN upgrade

The existing infrastructure of the CČN has been in operation since 1981. With the addition of the processes for the removal of nitrogen and phosphorus, as well as with the increased wastewater inflow capacity of the plant, the CČN was upgraded in 2016, thus reaching modern and high environmental standards. What is more, its reception area represents one of the biggest of its kind in Slovenia, as the CČN treats not only the municipal but also other wastewater from the areas of the municipalities of Domžale, Kamnik, Mengeš, Komenda, and Trzin. Within the upgrade project, the municipality of Cerklje na Gorenjskem was connected to the sewerage network. The upgrade project was expected to make the CČN the fourth largest wastewater treatment system in Slovenia and was to ensure high-quality parameters in the treated water at its final discharge point into the Kamniška Bistrica.

The investing municipalities agreed on a common project to upgrade the CČN plant, which was included in the framework project entitled »Removal and treatment of wastewater in the area of Domžale-Kamnik« and was under exclusive responsibility of the municipalities which are the owners of the infrastructure.

The project consisted of constructing a new aerobic/anoxic biological stage to ensure tertiary treatment by means of sequencing batch reactors (SBR), and an additional facility at the point of wastewater inflow to enable reception of substantial quantities of wastewater and ensure an appropriate mechanical pre-treatment of wastewater, which would increase the overall operational safety. The capacity of the upgraded plant is 149,000 PE, which means it can receive the wastewater of the entire population in the reception area, as well as other wastewater and rainwater. The quality of the treated water after the planned upgrade is in accordance with the legally required parameters, i.e. the total nitrogen is below 10 mg/L and the total phosphorus is below 1 mg/L, which represent the parameters prescribed for the Danube River Basin. The project contributed significantly to the improvement of the quality of the Kamniška Bistrica and resolved the issue of wastewater treatment in the region for the period of at least three decades.

The construction works for the CČN upgrade were performed gradually, as it was necessary to ensure that during the upgrade the system operated fully and normally, with only short interruptions for connecting the new wastewater treatment lines to the existing ones, and that the wastewater treatment processes were performed in accordance with the legal requirements. The upgrade of the biological stage was completed by August 2016.

The investment in total amounted to 15.1 million euros. The project was partially funded by the EU Cohesion Fund and the Republic of Slovenia (85% + 15% of eligible costs for co-financing), the rest was covered by the owner municipalities from their budgets.

The contract with the contractors was signed on 17th June 2014; the project was carried out in accordance with the schedule. The municipality of Kamnik led the upgrade project, while the municipality of Domžale took over the Construction Committee. For the construction works and the supervision of the construction, contractors were selected by means of a public tender in 2013. The construction was performed by SGP Pomgrad d.d. from Murska Sobota and its partner GH Holding d.d. from Ljubljana. The supervision services were supplied by Proplus d.o.o. from Maribor. The Public Corporation of the Domžale-Kamnik Central Wastewater Treatment Plant d.o.o. (hereafter the JP CČN) is the legal entity that carries out the public service of wastewater treatment, acquires environmental permits, and is in charge of operational monitoring of wastewater, including checks on the quality of the treated water, and other emissions into the environment. During the planned construction works the professional team of the JP CČN invested all of their knowledge and experience into the coordination and management of these processes, so as to ensure the full operation of the existing and new processes, and at the same time, to achieve the required results of wastewater treatment with at least the legally prescribed values at all emission sources.

The grand opening of the upgraded CČN was on 26th October 2016.

The most important part of the upgrade has been to build a new aerobic biological stage during which nitrogen and phosphorous compounds, in addition to carbon compounds, are removed. Consequently, the CČN was able to comply with the legal requirement of including the teritiary treatment in the process.

For more information on the CČN upgrade project visit: http://www.odpadnavoda-domzalekamnik.si