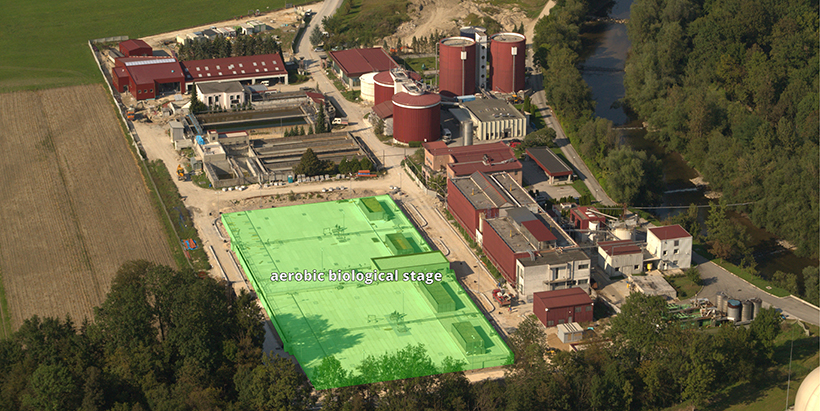 The SBR basins operate in three stages. The first stage consists of filling and aeration. The second stage involves separating the activated sludge from the treated water. In the third and final stage, decanting of the treated water and drainage through the outflow take place. The wastewater flows simultaneously into individual SBR basins with a time delay. Normally, the SBR basins operate in four-hour cycles; however, during the rainy season, when the quantity of wastewater increases due to the mixed sewerage system, reactors operate in three-hour cycles.

In the first stage during the first half of the cycle, SBR basins are filled and aerated. Air is blown through the floor aerators by blowers, which ensures a sufficient amount of oxygen needed by microorganisms, known as the activated sludge, to purify the wastewater by decomposing substances in it. Microorganisms use these waste organic substances, expressed in biochemical oxygen demand, together with inorganic substances, such as nitrogen and phosphorus, to grow and reproduce. In addition to the activated sludge, microbial decomposition of organic and inorganic substances produces also carbon dioxide, elementary nitrogen, water and other substances, which are less harmful to the environment than wastewater.

HOW THE BIOLOGICAL TREATMENT TAKES PLACE

In the anaerobic selector at the intake of each SBR basin, wastewater is combined with the return activated sludge flow. The selector ensures the partial biological removal of phosphorus and prevents the growth of filamentous bacteria. In the selector, during a short retention time in the absence of oxygen, phosphate-accumulating bacteria release phosphorus from their cells, and at the same time accumulate large quantities of organic carbon. For this reason, the quantities of phosphorus received in the aerated part of the basin exceed those released in the selector. If the value of phosphorus gets above 1 milligram per litre, iron chloride is added to the wastewater to precipitate out the excess phosphorus.

Once the filling and aeration phases are complete, the water and sludge separation phase starts. When aeration stops, the activated sludge settles to the bottom where the sludge is pumped into the thickeners. The third phase involves decanting the treated water prior to its discharge into the Kamniška Bistrica river. At the outflow, monitors continually measure the flow rate and analyse the quality of the treated effluent.

Surplus secondary sludge from the SBR basins enters the sludge thickeners where it undergoes a mechanical thickening with the aid of a polyelectrolyte coagulant. The mechanically thickened sludge is pumped through ultrasonic disintegrators into the digesters. Ultrasonic energy breaks down the microbial cell structures, which improves sludge digestion, reduces the amount of organic matter and increases the production of biogas.

Next to the primary clarifier, there is a facility for receiving liquid biodegradable waste. The liquid waste passes through a sieve and a crusher before entering the hygienisation tank where the liquid waste is heated at 70 degrees Celsius for 1 hour before it enters the digesters.